I am on a quest for perfect frosting.  I went to a cake decorating class at the church last month and it was so fun.  What really got me though was the taste of the frosting.  It was sooo good.   This inspired my quest.  You see I am supposed to be gluten free but that is so hard when faced with a beautiful cake from Costco or some other grocery store.  I just love cake with bakery frosting.  Now that Betty Crocker has gluten free cake mixes I’m one step closer eating cake with out killing myself but it’s the frosting that I can’t get right.  And so begins the quest.

After trying a bunch of recipes I think I have found a winner.  Check out my pretty cake: 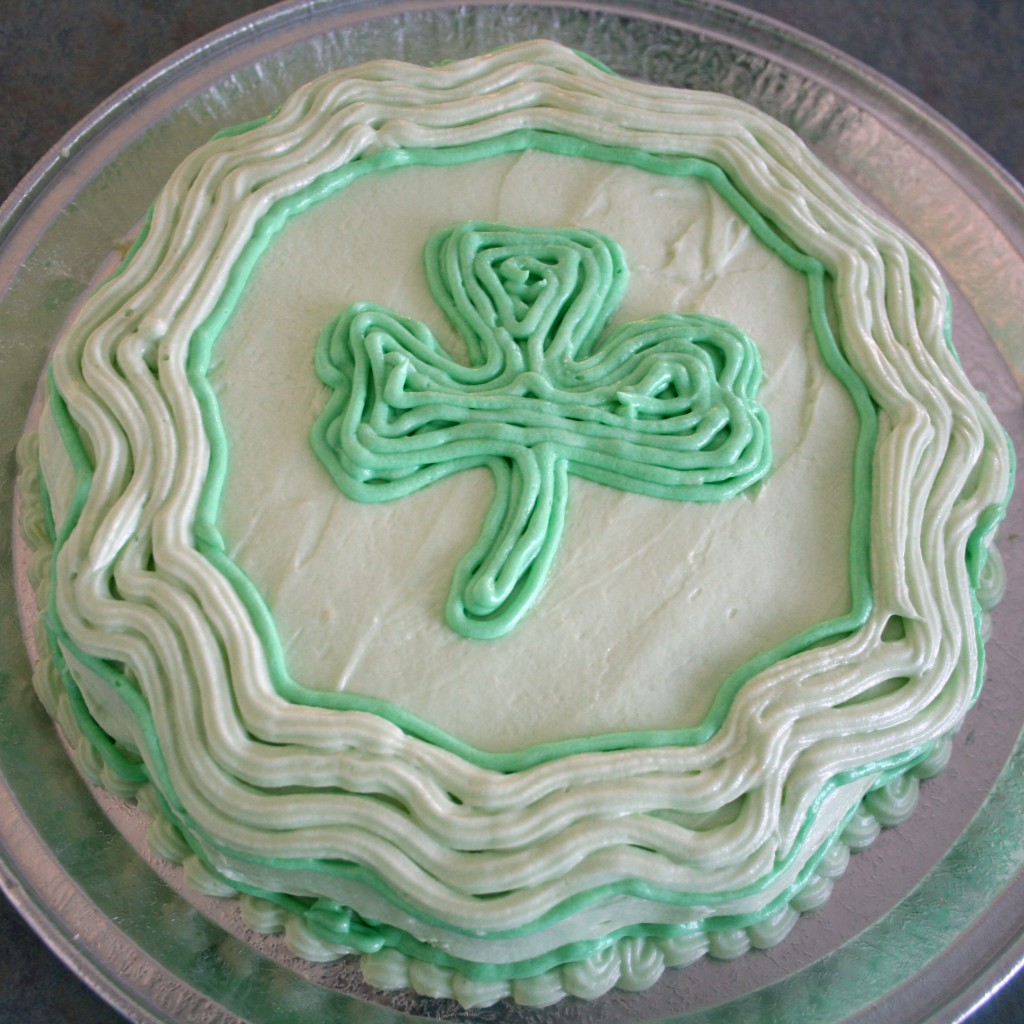 Obviously I’m no decorator but the frosting tasted divine.  I used a recipe I found online I added a teaspoon of meringue powder and a teaspoon of salt.  I think I used too much water because the frosting didn’t hold it’s shape.  The shape wasn’t all that pretty anyway, I have much to learn.  My quest didn’t include learning to decorate though.  It was a tasty frosting quest and I think I’m near the end.  I have eaten a lot of cake to get there.  Do you want a piece?  I’m looking for excuses to make more cake so I can try variations on my new frosting find. 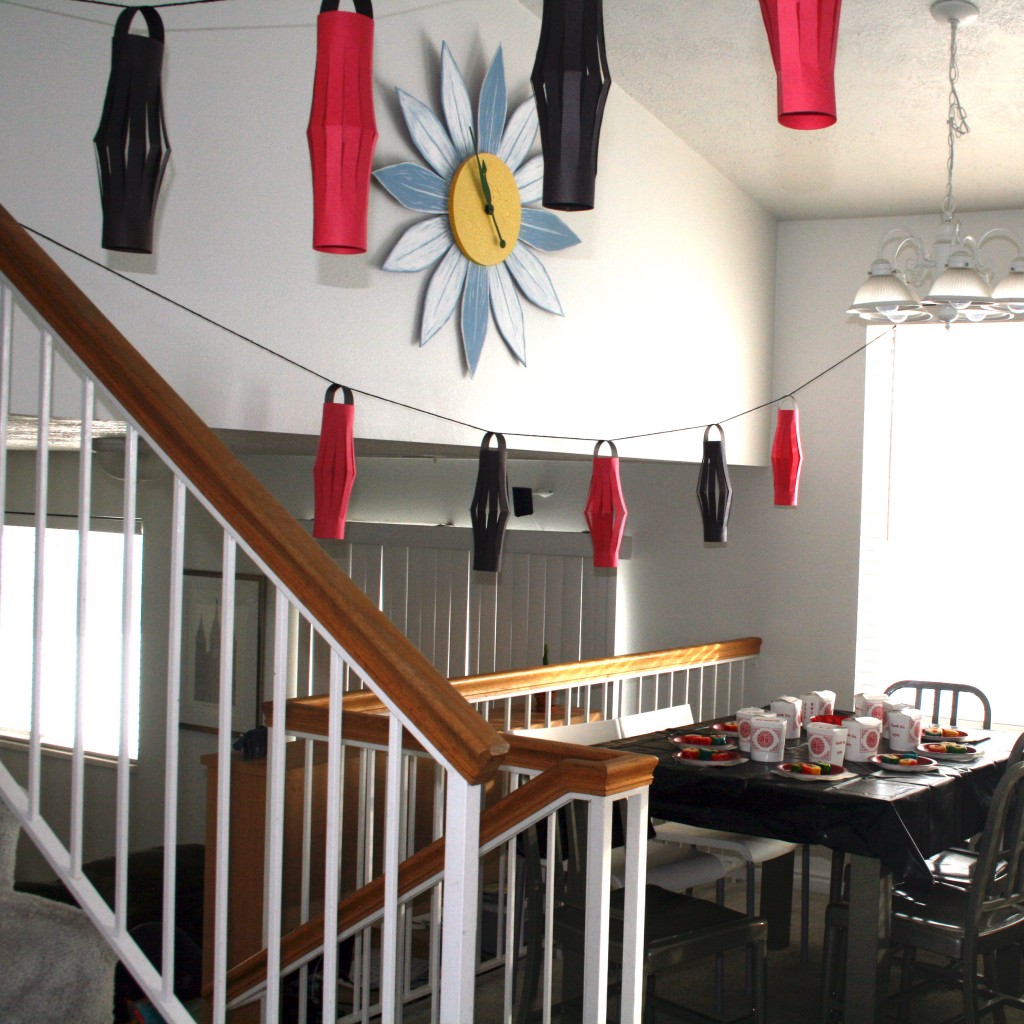 It has been one crazy week here at my house so I haven’t had a chance to be very crafty.  I thought about crafts as I cleaned up after sick kids.  I also thought about crafts when I sat in the doctor’s office waiting for him to tell me that my baby does have R.S.V.  And I thought about crafts while I washed loads of laundry.  I did not actually do any crafts though, so no blog post this week, right?  Wrong!  I’m going to tell you about the ninja birthday party I hosted for my 7 year old’s birthday.

First, a disclaimer:  I have never attended a kids birthday party, not even as a kid.  Thus, I was really nervous about what to do.  The Boy wanted a ninja party so I started searching the web for and thinking of ideas.  I started with Chinese lanterns just like I remember making in elementary school.  My kids were able to help, which makes them extra fun.  Then we hung them from banisters and things.

The guests were sent invitations to a ninja training.  We rolled up the invitations like a scroll and tied them with red ribbon.  When each child arrived at the party they were given a ninja head band so they felt more like ninjas.

I assumed that there are games at a typical party so I set out to think of some for the party .  I remembered that my brother used to make paper ninja stars when we were kids so I found instructions online and made each child their own color of stars.  We played a game where we improved our aim by throwing them at pictures of dragon faces on the wall.

I found an idea online for a game where you try to keep a balloon afloat using ninja swords, so my quest for cheap ninja swords began.  I searched dollar stores and party stores but alas no swords.  I also didn’t want to spend $1 per kid for them because I was doing other stuff too.  Then my brain came up with a great idea (this doesn’t happen all that often). 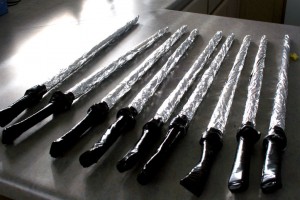 I made these ninja swords by rolling up sheets of newspaper from corner to corner.  Then I taped it so it wouldn’t unroll.  I folded up the bottom to make the handle a bit more substantial then wrapped it in electrical tape.  Finally I wrapped the sword in tin foil.  I love the results.  The kids did too.   They weren’t awesome at the game.  They just wanted to pop balloons with their swords, but that kept them busy.

Instead of cake we had candy sushi.  It turned out so cute and super tasty.  I keep trying to think of other things to do with rice krispy treats covered in fruit roll up. 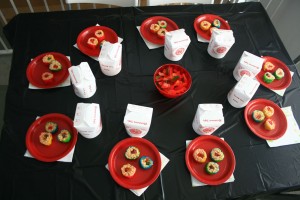 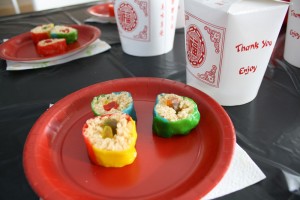 For party favors I wanted take out boxes from a restaurant.  I looked at party stores but they were so expensive.  Then my sweet husband brought home the perfect boxes that he asked for at a restaurant where he had lunch.  They gave them to him for free, but he said he left a big tip.

We filled the boxes with fortune cookies, Chinese finger traps, and plastic ninjas that I got at the dollar store. 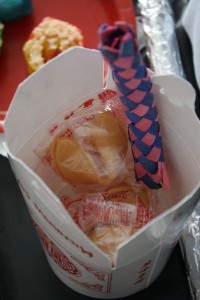 My first birthday party was a success.  The kids had fun,  my little ninja was happy, and the mom was the hero of the day! 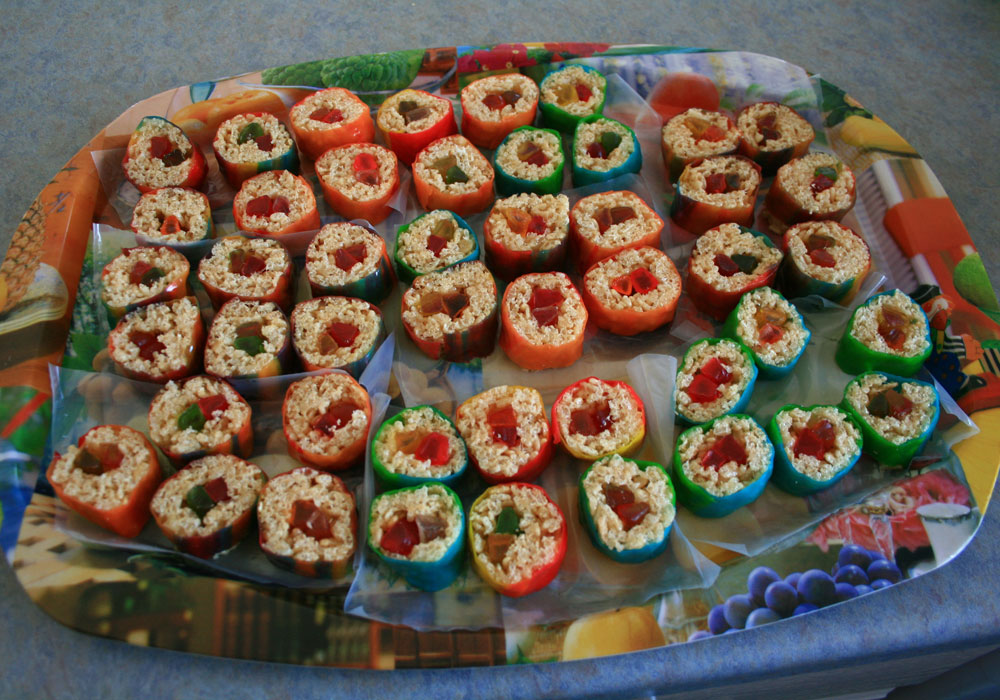 When my oldest son turned 7 last month he chose to have a ninja party.  There aren’t many party ideas out there for a ninja party so I came up with a few of my own ideas (look for more ninja party posts later).  One Idea I did find online was candy sushi.  It seemed to go with the theme.  My little guy doesn’t like chocolate or cake so it also seemed like a fun alternative.  My first attempt at making candy sushi was…well it wasn’t great.  The second time around though it went really smoothly.  Maybe I can help you avoid my mistakes! 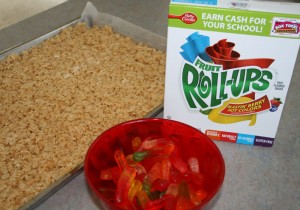 So you start by making Rice Krispie Treats.  Here’s some instructions if you don’t know how.  If you do, go on to step 2 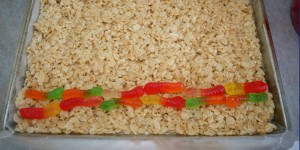 Step 3:  Place gummy worms close to the edge of the pan.  I have seen people use licorice but i like gummy worms better.  I put 2 side by side all the way across the pan.

Step 4:  Pick up the wax paper and use it to help you roll the rice krispy around the gummy worms.  Use a big knife to cut along the edge of your roll then squish the roll with your hands to make sure the gummies are secure in the middle of the roll.  I do this entire step with the wax paper around the roll, it’s just less messy that way. 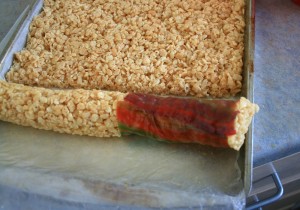 Step 5: Now you are going to wrap the roll you just made in a Fruit Roll-Up.  This is when I ran into the most problems, so I will impart my Fruit Roll-Up wisdom on to you.  I couldn’t get the thing off the wax paper it comes in.  It kept tearing and I kept cursing.  I figured out that if you put the Roll-Ups in the fridge for a couple of min. it helps alot.  I also couldn’t fit the Roll-Up around my roll.  I don’t know if I made the roll too large or what, but I learned that you can stretch a Fruit Roll-Up quite a bit and it’s much easier to do that before you wrap it around your roll.  Be gentle though, it will tear and you will curse. Now you Squish the the whole thing with your hands.  That helps the Fruit Roll-Up stick better to the Rice Krispie roll.

Step 6: Move your Roll-Up covered roll to a cutting board and use a good knife to cut 1-2 inch slices.  Sometimes the gummy worms jump out.  Just stick ’em back in. 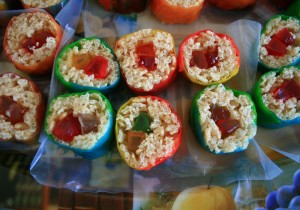