A while ago my dear friend Liz told me that her baby loves feeling jammies when he goes to bed.  He can only sleep with a soft fleece pajama to love.  She wondered if I could make a lovey blanket from a pair of his pajamas.  I was up for the challenge, though not exactly sure what to do.  She said that he loves the softness of the body of the pajamas, and he also loves to play with the snap that goes over the top of the zipper.  Here’s what I came up with. 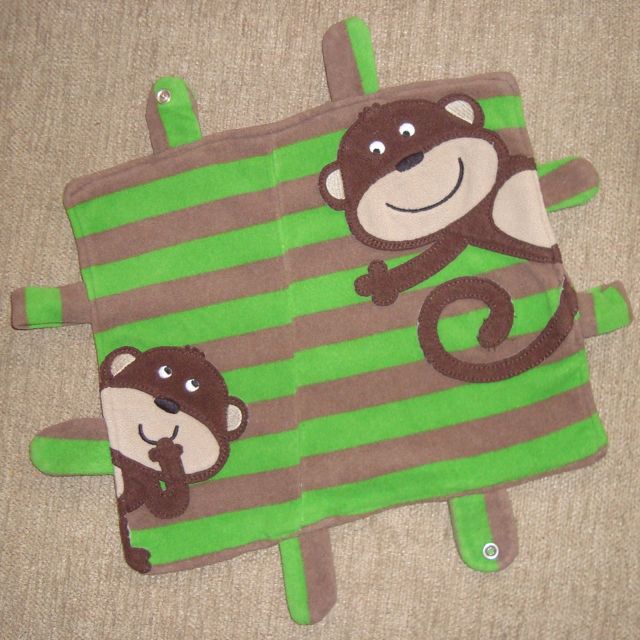 First of all I removed the zipper (I got a free zipper out of the deal…sweet!) I just picked it out with a seam ripper.  I needed the extra fabric that was sewn to the zipper to close up the center of the blanket.  Next I cut across the top just under the arm pits and the bottom just above the crotch. 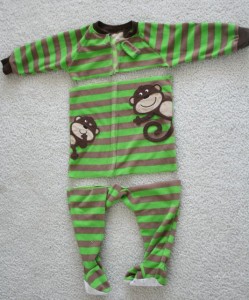 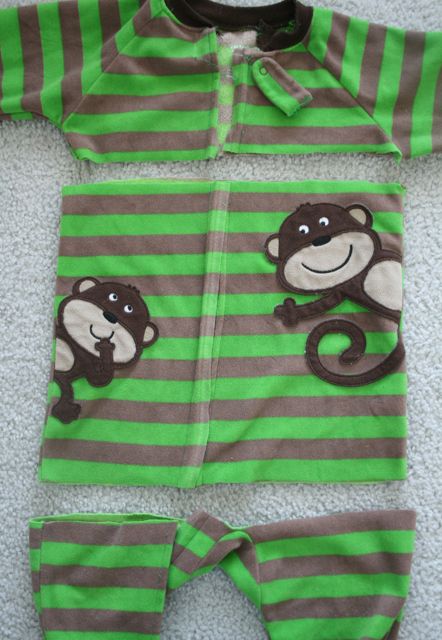 I made two of these blankets so on the first one I cut up the sides to make them look straight and even.  On the second one I decided that the baby doesn’t care much for straight and even so I left them the way they were.  Slightly bigger at the bottom and smaller at the top.  I wanted to add that snap bit from the top but I also thought it would be fun to add other things around the sides.  I used fabric from the sleeves and legs of the pajamas to make loops and stuff.  I used the snap bit as a pattern and made 5 more of the same shape.  I included in that one that took in the other side of the snap.  That way there were two snappy ends to play with and when he’s older he can even snap them together.  I made tubes of fabric from the extra and folded them in half to make loops. 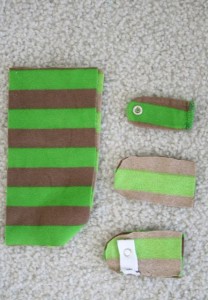 On the main blanket, I turned the fabric so that right sides were facing in and sewed together the place where the zipper was.  I used my seam ripper and picked out places on the sides where I wanted my loops and stuff to go,  put them into the holes I made (careful, you want the part the baby is going to play with on the inside of this blanket sandwich.  Only the rough end should be poking out where you can see it.)  and sewed the holes closed.  Then leaving a wee hole to turn the whole thing right side out I sewed around the whole blanket.  Finally I turned it all right side out and ran a top stitch over the whole thing.  I like to make sure the little bits around the edges won’t fall off so I sew them, sew them again and then sew them again.

I’m told that Liz’s baby loves his blankets and I have to admit, I’m pretty happy with how they turned out.  If I ever have another baby, maybe I’ll make one for him.